The internet nearly broke yesterday with people expressing diverse opinions on the claims of Keche Andrew’s wife, Joana Gyan that she makes about $700,000,000 at the end of each year in an interview with Delay.

While many people have stated without any proof that she was actually lying through her teeth in that interview, others believe that it could be possible.

Among the many people who see her claim as a preposterous lie is blogger, journalist and communication practitioner, Kwame Gyan formerly of E.TV Ghana.

Kwame Gyan in a Facebook post sighted by zionfelix.net did not mince words in his quest to shoot down this claim.

According to him, the CEO of Golden Legacy Empire Limited and other businesses possibly does not know what $700,000,000 is, which is why she decided to mention that as her net worth.

He also tagged Joana Gyan as a villager and a foolish person for making such a claim. 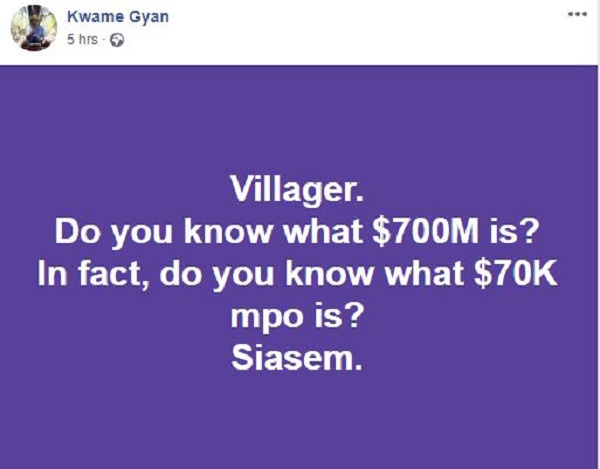 Watch Joana Gyam making the claims on the Delay Show below: