Police Scotland has unveiled a new aerial drone system to help in searches for missing and vulnerable people.

The remotely-piloted aircraft system (RPAS) can see things we can’t to try to work out where people are.

It uses advanced cameras and neural computer networks to spot someone it is looking for – from “a speck” up to 150 metres away.

Its recognition software is compact enough to be run on a phone, with the technology learning as it goes.

“The drone itself has very special sensors on it,” said Insp Nicholas Whyte, of Police Scotland’s air support unit.

“There’s a very highly-powered optical camera which can allow us to see things quite clearly from a good height. Also, there’s a thermal imaging sensor which detects heat.

“We’re there to find people. People who need our help or people who are lost.” 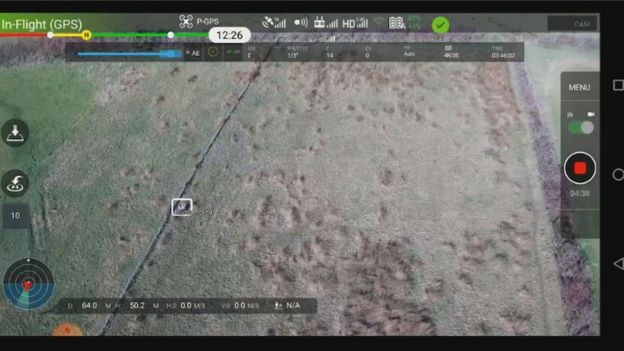 The drone has a high-powered optical camera

The system is the result of a collaboration involving Police Scotland, the technology multinational Thales and the University of the West of Scotland (UWS).

The matchmaker in the partnership is CENSIS, one of Scotland’s eight not-for-profit innovation centres.

The CENSIS remit is to bring together private businesses and the public sector to exploit advances in sensing, imaging and the so-called Internet of Things.

Drones are an increasingly common sight. Outwardly, this one looks no different apart from – almost inevitably – a flashing blue light.

But the data this drone gathers is processed in real time. The software can discern a person, animal or vehicle from just a handful of pixels in a huge moving colour image.

How? Because they taught it to. 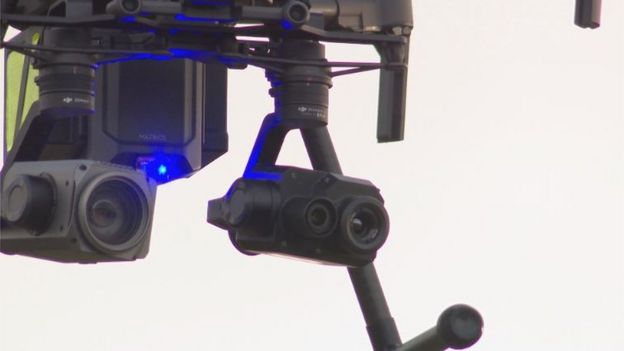 Prof Carl Schaschke, dean of the School of Computing, Engineering and Physical Sciences at UWS, said it could spot someone from up to 150 metres away.

“It does that by being shown images, multiple images, time and time again until it recognises what the objects are from pretty much any orientation,” he said.

The term artificial intelligence may conjure up images of Terminator-like thinking robots.

But in this case it means a machine that can learn.

The team taught it using hundreds of hours of footage of police officers in different clothing, positions and situations.

And there’s another breakthrough.

“It really is quite a low-cost approach to this – it simply uses a mobile phone.”

A search needs just two police officers to operate it: one to fly the drone, the other to use the recognition software. 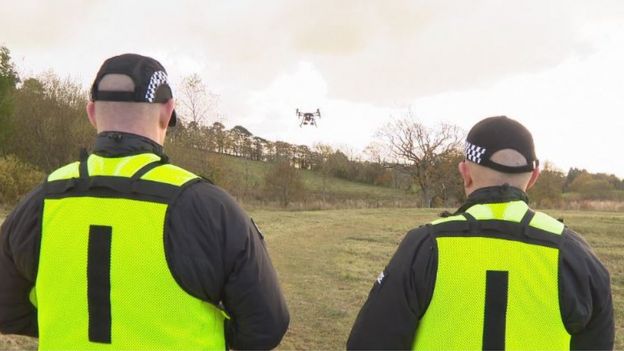 A search needs two police officers: one to fly the drone, the other to use the recognition software.

Thales’ technology and innovation lead Dr Barry Connor said the system had been designed to ease the burden on its users.

He said: “That’s very important in order to reduce the cognitive burden, with operators having a deluge of data.

“Being able to operate something on a mobile platform in real time is a breakthrough.”

Police Scotland has already deployed three of the drones across Scotland and the system’s formal launch will come on Thursday at the annual CENSIS technology summit in Glasgow.

Not a spy drone

Technology of this kind inevitably raises questions of privacy and civil liberties, but Insp Whyte is adamant that this is not a spy drone.

“This is a very overt policing tool,” he said.

“We’ll comply fully with all the human rights legislation – in fact a data protection impact assessment has been carried out and we review that yearly. Also, before we deploy we’ll use social media to tell the public this is what we’re doing.

“So we’re very open and transparent about how we deploy the drones.”

There is another way in which people will be alerted that one of the drones is approaching: it makes a bit of a racket.

Its four rotors produce a sound like an angry garden strimmer.

Nothing like as ear-splitting as a low-flying plane, but enough to tip you the wink that it’s in the area.

If you’re lost or in need of help, that could be a very welcome noise indeed.